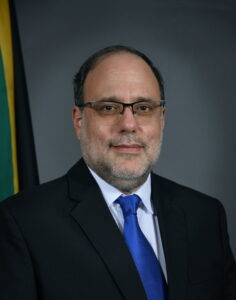 eader of the Opposition Mr. Mark J. Golding is an attorney-at-law, specializing in the areas of corporate finance, capital markets and mergers and acquisitions. He has been lead counsel in many public and private sector issues of domestic and international debt and equity securities, and in several large corporate mergers and acquisitions. In 2011, he took a leave of absence from Hart Muirhead Fatta, the firm of which he has been a partner since 1993, to assume his appointment as Minister of Justice.
Mr. Golding studied law at Oxford University, where he graduated with first class honours.
Wishing to return home to practise, he attended the Norman Manley Law School in order to be called to the Jamaican Bar, and received its prize for the most outstanding student of the class of 1987-89. He then won a Commonwealth Scholarship and continued his studies at the University of London, obtaining a master’s degree in commercial and corporate law.
In 1993 the opportunity arose for him to join with two young Jamaican investment bankers to form Jamaica’s first investment bank, Dehring Bunting &amp; Golding Limited (DB&amp;G). The business flourished to become a leading and innovative part of Jamaica’s financial landscape. In 2006, was acquired by the Scotia Group. In January 2010, he joined with some of his former colleagues to form Proven Investments Limited, an investment company which is listed on the Jamaica Stock Exchange.
Mr. Golding served on the Task Force which performed the developmental work leading to the creation of the Financial Services Commission as Jamaica’s regulator for the securities, insurance, unit trusts, mutual funds and pensions industries. He also represented the Private Sector Organization of Jamaica on the Matalon Tax Reform Committee, and before the Joint Select Committee considering the Companies Bill 2004.
Mr Golding has been a director of several leading companies, including GraceKennedy, The Bank of Nova Scotia Jamaica, Kingston Wharves and CariCris, the Caribbean Region’s first credit rating agency. He is the Chairman of the Mona Rehabilitation Foundation (founded by his late father, Professor Sir John Golding), and was formerly a director of Food For The Poor Jamaica.
He was appointed to Jamaica’s Senate by the Leader of the Opposition in September 2007. He served as the Opposition Spokesperson on Industry &amp; Commerce until May 2011, and then as Shadow Minister for Justice, until being appointed Minister of Justice in January 2012. He was also named Chairman of the Legislative Committee of Cabinet. During his 4-year term, 121 Acts of Parliament were passed under Mark’s stewardship including the Dangerous Drugs (Amendment) Act 2015 aka The Ganja Law,’ The Disabilities Act 2014, the Administrator- General (Amendment) Act, 2015 and The Local Governance (Amendment) Act, 2016. Mr. Golding was first elected Member of Parliament for South St. Andrew in 2017 and in November
2020, he was elected as President of the People’s National Party and now serves as the Leader of the Opposition.